How to Catch Blue Crabs

HOW TO CATCH BLUE CRABS

Bait, pull and net – the blue crab can be caught using a technique that has been used for years, bait, pull and net. When following this blue crab fishing tip, the bait, sometimes chicken necks, is tied to the end of a string and dropped to the bottom of the bay floor.  (This blue crabbing method is typically done in less than 5 feet of water)  By feeling the tension in the line, the person can feel whether or not there is a crab on the bait.  As soon as the tension in the line feels like the crab is on the bait, the line is slowly pulled up to about 6 to 12 inches from the top of the water.  A net on a pole is then used to snag the crab off the bait.  This is the most simple blue crabbing method and a great way to spend an afternoon.

Potting Crabs – This method is used not only by recreational crabbers but also by commercial crabbers.  A square trap sometimes made out of chicken wire is baited and thrown into the water attached to a string that is then attached to a buoy or dock.  The crabs are able to gain access to the center of the trap where the bait is located but are not able to escape.  After the trap has been allowed to sit for several hours or even up to a couple days, the trap is then pulled out of the water and opened.  A couple quick shakes of the trap and all the crabs fall out of the trap.

Potting Crabs – This blue crabbing method is identical to the way recreational crabbers pot for crabs, however, the commercial crabber typically will work 50 to 200 pots a day.  The pots are tied to buoys and normally located in a straight line about 50 feet from the other pots.  After the pots have sat for a day or two the commercial crabbers will harvest the crabs and re-bait the traps.  The buoys are snagged with a hook attached to an end of a pole.  The rope attached to the buoy is wrapped around a motorized wheel on the boat that pulls the trap out of the water.  The crabber will quickly open the trap, shake out all of the crabs, re-bait the trap and throw back into the water.  This is done very fast allowing enough time to hook the next buoy in line.

Trotline – This method is similar to the recreational blue crabbing method, bait, pull and net, except for the vertical line attached to the bait is also attached to another line that is kept on the surface of the water.  The vertical line is weighted properly to hold the bait on the bottom of the bay floor.  The rope on the surface is kept a float with buoys.  The rope at the surface is attached to the vertical ropes approximately every 30 feet.  The commercial crabber will sometimes run several trotlines at the same time.  The trotlines do not have to have to soak as long as the crab pots.  The commercial crabber will attach the rope that is located at the surface to a motorized wheel on the side of the boat.  By maintaining the appropriate speed of the boat, the motor will pull the baited line up at the same speed as the forward movement of the boat.  This will insure that the vertical line is pulled straight up and not the side.  The crab continues to hang on to the bait until it gets close to the surface of the water.  The crab will then let go, trying to escape, only to fall into a net or mesh basket that is attached to the boat just beneath the surface of the water. 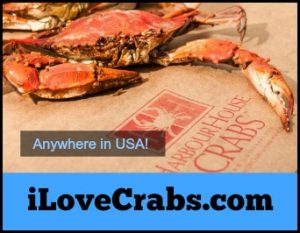 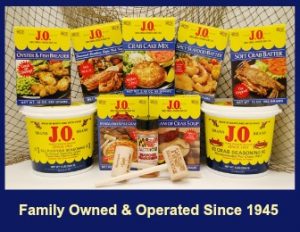